The last couple of weeks have been a bit of a blur. Being involved with GiveMeTap operations as well as PR/communications means that many days are spent just getting things done, as opposed to big events… I want to say this is my excuse for not writing a Week 7 entry, but I’m sure i’ll be caught out sooner than later as I actually spent quite a bit of last week on holiday!

IT IS SUMMER, YOU KNOW! 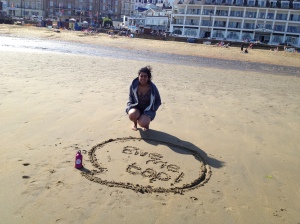 So right now i’m going to just talk about 2 amazing things that have happened over the last couple of weeks. Both have added substantially to my PR portfolio (although one has  significantly more than the other!)

Firstly, I was interviewed by London Calling, who loves GiveMeTap and wanted a feature to share with London. Read it HERE. This was amazing as it has now gone on their website and I felt like a minor celebrity for about 5 minutes. It was nice! Today, three of my friends and family have shared my interview on social media, showering me with kind words of praise. Thank you – you know who you are!

Secondly, and more importantly, a lead that I had been chasing had finally been closed. We were published in the most widely distributed and read paper on public transport in the UK – THE METRO! Yes,  you heard right! THE ACTUAL METRO. For years I have been reading that infamous publication and not just for the guilty pleasures or the horoscope! I knew that when I came to GiveMeTap, it would be my aim, not only to have a print published piece, but get into the Metro. I DID IT! I managed to bag Edwin an interview with a writer who happened to LOVE what GiveMeTap were doing. He wrote an amazing piece on us and the traction that day was UNBELIEVABLE. Sales were through the roof, people were talking about us and people were even recognising us. Again, I felt like a minor celebrity but for a bit longer than 5 minutes this time! 🙂

You can read the piece HERE.

Watching this business grow is amazing. Not only is the work satisfying, but it is so much fun! I genuinely feel sometimes, that this is all a dream. I hate the thought of pinching myself and waking up at my university desk writing an application for a job I don’t want at a firm I don’t want to be working for. A good friend and mentor of mine once told me, “Never compromise on what you want from life. By all means ‘shop around’. Explore all your options. But just don’t compromise…” Wise words from a wise woman. I intend to follow them!

Another short but sweet entry! This week has been as busy as ever, as you may have figured since I have been less responsive on most media forms (This is rare for me!).

We launched our summer campaign, MindTheTap, on Tuesday and have been ‘all systems go’. This week, and more specifically, that day, really tested my ability to deliver under pressure. We had a very tight deadline to launch MindTheTap and needed to work together as well as individually to achieve success. The first feeling of ‘work pressure’ had hit me, and it was surprisingly addictive. I loved the rush of being productive and just getting things done!

It also led me to achieve a major goal – my first real published article! On the PR side of my placement, this is big news as it starts of my portfolio of material, while showing I can pitch to journalists. That bit has been pretty scary, if i’m honest! However, I am getting more confident with time! You can read my piece here: http://www.greenwisebusiness.co.uk/news/green-sme-givemetap-signs-major-water-bottle-deal-with-deloitte-4043.aspx.

I’m really appreciating all the hard work that goes on behind the scenes of a business like this. You have to live and breathe what you do without over exerting yourself and compromising your long-term success. Everyday is worth it when I think of the bigger picture of why we do what we do, and the amazing results – we contribute to helping people survive.

Very proud to be here. I hope that everyone reading this takes time to like our facebook page, maybe buy a bottle, and feel as proud as I am! 🙂

If you haven’t already, find out what adoseofpersonalwhim is about in About Sanum Jain…